Nutrition Diagnostics - The Politics of Health: The Flexner Report & its Impact on Modern Healthcare

The Politics of Health: The Flexner Report & its Impact on Modern Healthcare

There are two definitions of health. One is that health is simply the absence of disease. The other, recognises health as a perfect balance of chemistry (homeostasis), triumphing over disease. One is a better definition than the other. When you define health as the absence of disease, you do nothing towards preventing disease and thus, disease is more common. Whereas when you define health as homeostasis, you work to prevent disease and thus, disease is less common.


Unfortunately, modern medicine views health as the absence of disease. This is largely due to the influential work of Abraham Flexner. 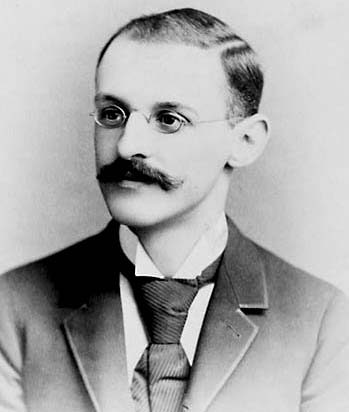 
In the early 1900s (following the success of European medicine), three influential philanthropists decided to change the course of medicine forever. These so called philanthropists were actually business magnates who had no medical qualifications, none other than John D. Rockefeller, John Pierpont Morgan and Andrew Carnegie. Their incredible wealth funded various research and reports.


Andrew Carnegie directed Abraham Flexner, a German education reformer, who also had no medical expertise, in the writing the renowned ‘Flexner Report’. The Flexner Report, with the aid of the American Medical Association provided the catalyse for the change of focus in medicine today. The Flexner Report is the construct behind what we now call the Biomedical Model Disease, that is focused on treating symptoms and labels instead of the cause.


It is also worth noting that John D. Rockefeller established the Rockefeller Institute of Medical Research, the Rockefeller Foundation and through Frederick Taylor Gates, the China Medical Board, all of which is still making an impact on global medicine today.

The Pros and Cons of the Flexner Report


Whilst many positives emerged from the Flexner Report - namely that it significantly improved the quality of medical education and subsequently the standard of doctors in the west - it also came at a cost. Flexner believed that osteopathic medicine, chiropractic medicine, eclectic medicine, naturopathy and homeopathy were at odds with the modern medicine he sought to promote. Thus, the teaching of such subjects were effectively banned at universities.

The reasons for this were likely manifold. At that point in time, such practices were considered to have little scientific validity and were branded by Flexner himself as ‘quackery’. Another possible explanation is that holistic medicines have a much broader scope for diagnosis - meaning they are incongruent with the Biomedical Model of Disease which Flexner was promoting.


How Money Influences the Biomedical Model of Disease


Another possible explanation is that Flexner’s view was politically and financially motivated. The Biomedical Model of Disease is far more financially lucrative than the holistic Health Model because it promotes life-saving vaccines and medications (produced by Big Pharma). When coupled with health insurance, you have the recipe for a system that lines the pockets of big business.


To this end, it is worth noting that charities and foundations have historically been used as a vehicle to reduce the tax burden of wealthy individuals.  Perhaps the ‘philanthropic’ endeavours of John D. Rockefeller, J.P Morgan and Andrew Carnegie had more to do with money than medical education.

With money being a major force in creating the medical global reset, these philanthropists amassed mind boggling wealth; John D. Rockefeller $423B* USD, J.P Morgan $1.2B* USD and Andrew Carnegie $475M* USD with $5.2B* USD to philanthropy (*adjusted to current inflation). The reality is that big business is undoubtedly the primary benefactor of the Biomedical Model of Disease.


For all the good that philanthropy does, it is also important to be mindful of how it is used to shift the public’s eye away from the disparity between the mega rich and the poor. When society feels the wealthy are giving back to the poor, public sentiment will often overlook their true agenda.

Disease is More Common Under the Biomedical Model of Disease


Alas, nutrition, environmental medicine and lifestyle management had to take a back seat for the next 110 odd years. Doctors, and all health/medical professionals for that matter, became specialists in crisis care management - which is appreciably beneficial in many circumstances (such as a pandemic).  However, it often fails people with respect to their health and wellbeing. The Biomedical Model of Disease works well when it comes to acute pain, sickness or injury, but it is not well set up to foster health (as defined by homeostasis). The great paradox of the Biomedical Model of Disease is that chronic disease, often encompassing multiple diseases, is likely to be more common under this model than the holistic Health Model. This is the downside to Flexner’s work. 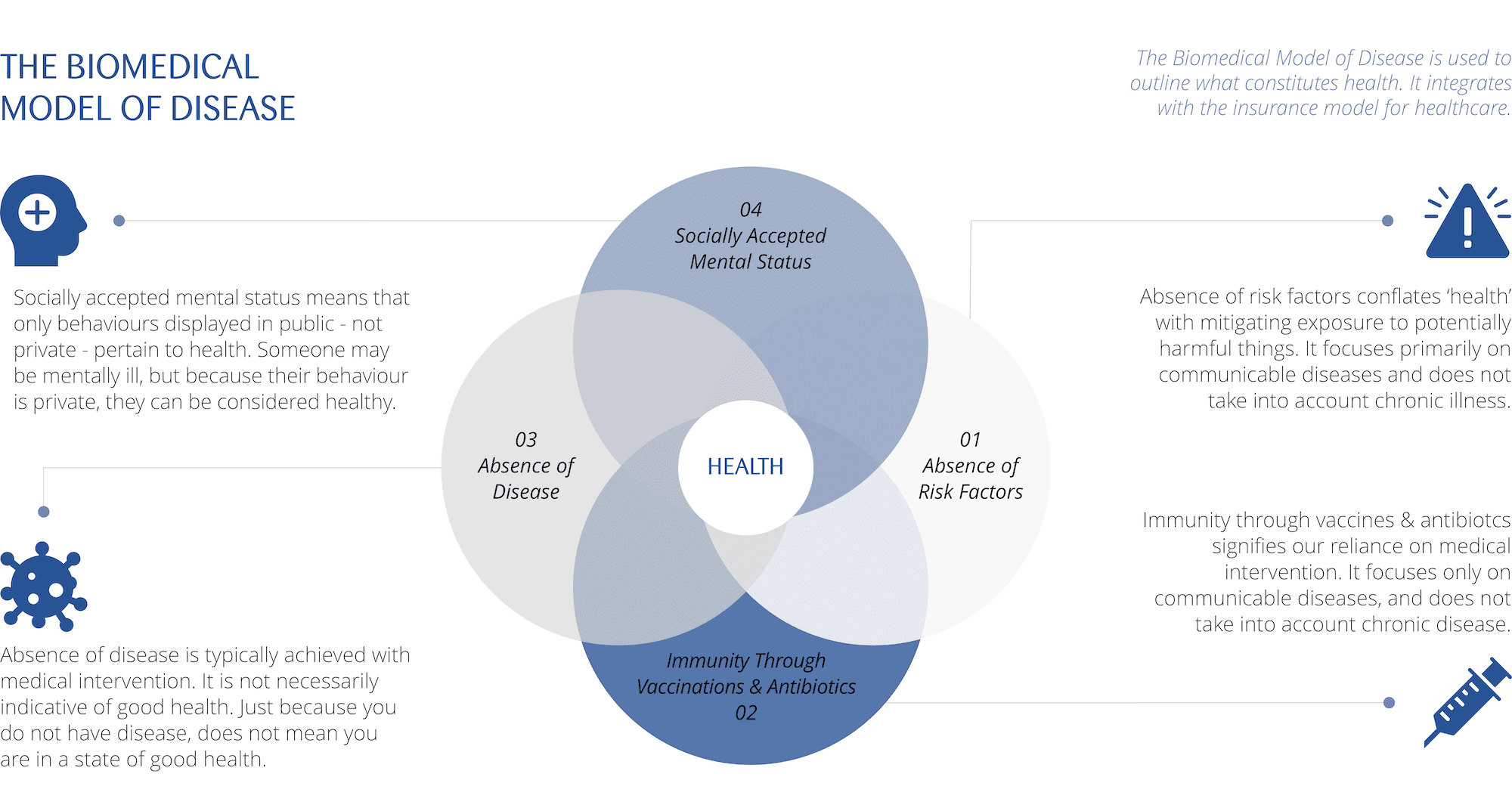 Social Media and the Dawn of a New Era


Fast forward some 110 years, and it is now becoming evident that defining health as the absence of disease has resulted in the increased incidence of chronic disease. Clearly, this system - the Biomedical Model of Disease - could be improved. This knowledge, coupled with increased information on the internet and social media, has drawn attention to the merits of holistic health. It is becoming clear that a holistic approach to health is critical in achieving health and ultimately preventing disease. The Health Model begins with the premise that it is necessary to understand how the body works in order to repair or improve it. It further proposes that health changes must be addressed from the perspective of their impact on total health, rather than just focusing on how medication impacts specific symptoms. 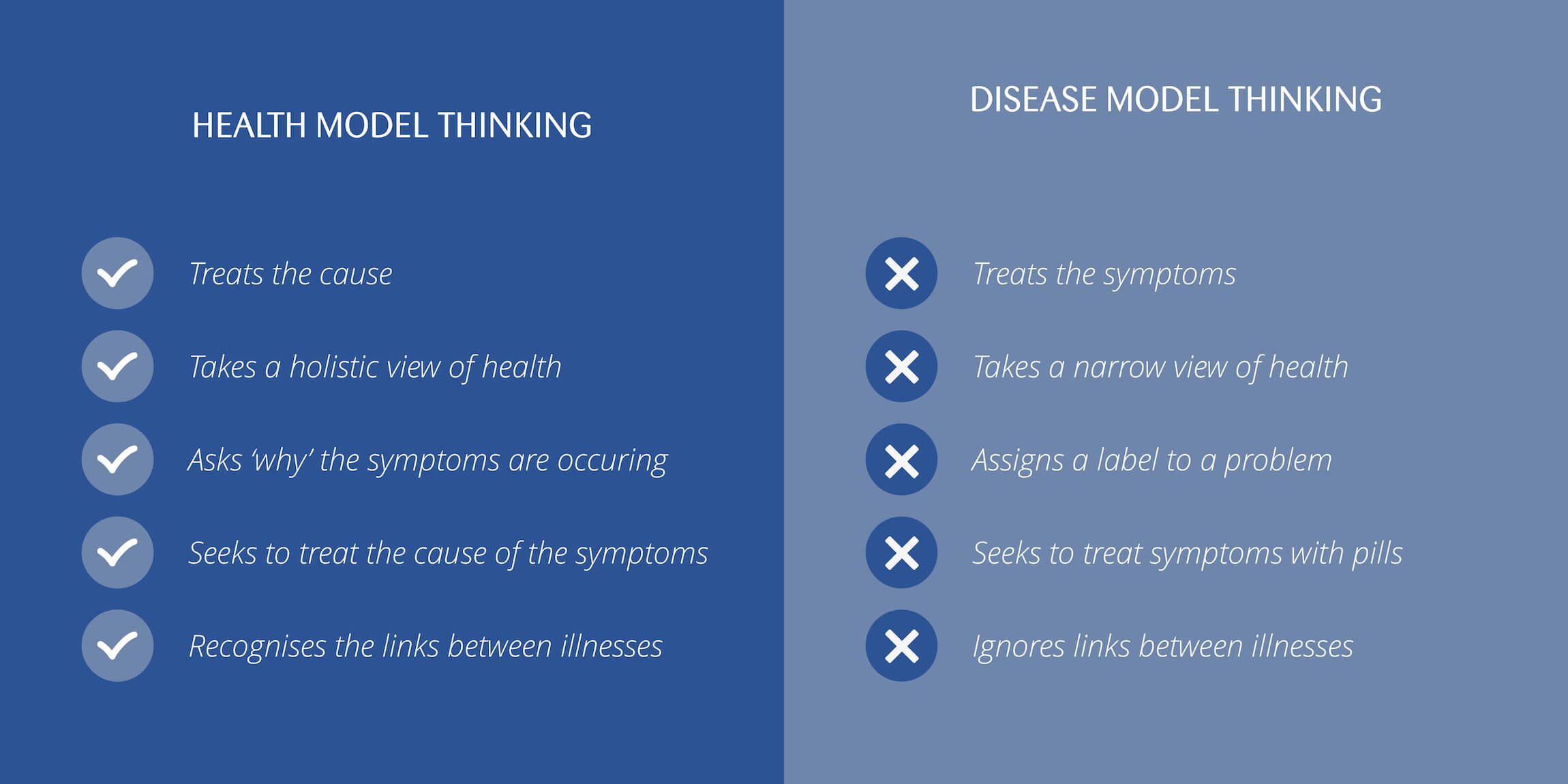 
At Nutrition Diagnostics, we believe the Biomedical Model of Disease and the Health Model should be complementary. We define ‘health’ as homeostasis, which we can accurately measure through blood chemistry. Blood Chemistry provides the answers to the challenges we face. A unique insight allowing us to correct critical imbalances in the body, in order to restore optimum health.