Nutrition Diagnostics - The Food Pyramid is Killing You

The Food Pyramid is Killing You

What if everything you have ever been told about nutrition was wrong? That following the 'food pyramid' is killing you. Well, it is. This idea that bread, cereals, grains, rice and pasta should form the mainstay of your diet is beyond ridiculous, it's dangerous. Blood chemistry confirms this. The food pyramid promotes a diet that is high in sugar (carbohydrates) and low in healthy fats. It's a recipe for poor nutrition, and poor nutrition is the recipe for malnutrition. Malnutrition leads to mineral deficiencies and imbalances in body chemistry - ultimately manifesting in chronic disease.


But can this really be true? Could the food pyramid prescribed by the government really be wrong? Well, the figures tell us it is. While we're living longer thanks to medical intervention, the incidence of disease has also increased. Obesity, diabetes, cancer, heart disease; all different, but all with a common link; the food pyramid.


Approximately 32.6 million Americans have type 2 diabetes and 88 million people suffer from prediabetes - that's about 36.7% - over a third of the population - of Americans who suffer as a result of their diet. Diabetes isn't just occurring at random - it is a direct result of following poor nutritional protocols.


Sugar and Carbohydrates: The Real Enemy


And if the figures aren't enough, let's look at the science behind it. Carbohydrates are broken down into glucose - or in other words, into sugar. What's not burnt is stored as fat. Fats, on the other hand, elicit no insulin response - the body doesn't need insulin to utilise fat for energy - meaning it is absorbed and partitioned much more efficiently.


Sugar - specifically elevated blood glucose - is the catalyst for type 2 diabetes. It occurs where the pancreas is unable to secrete enough insulin to remove the excess glucose from the blood, or, where the body develops what's known as insulin resistance - where the body becomes normalised to heightened insulin which renders it ineffective. Both scenarios are indicative of a diet that is high in carbohydrates and sugar. 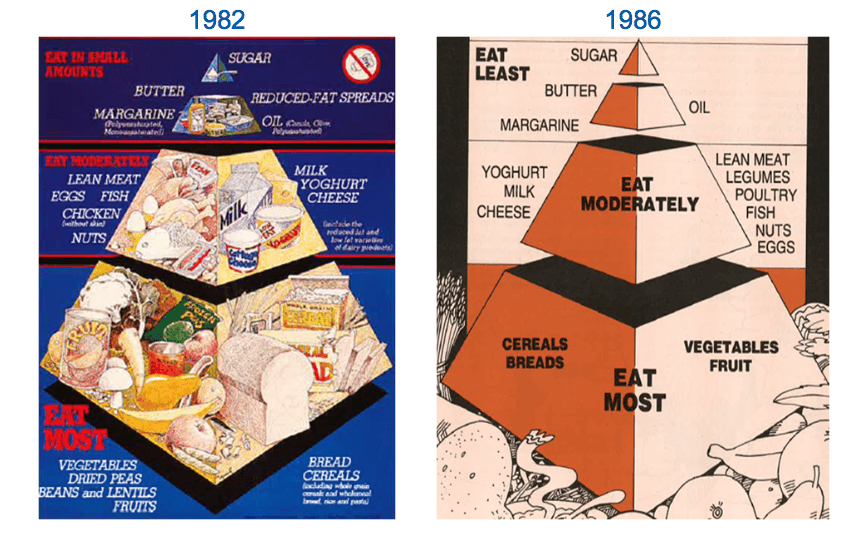 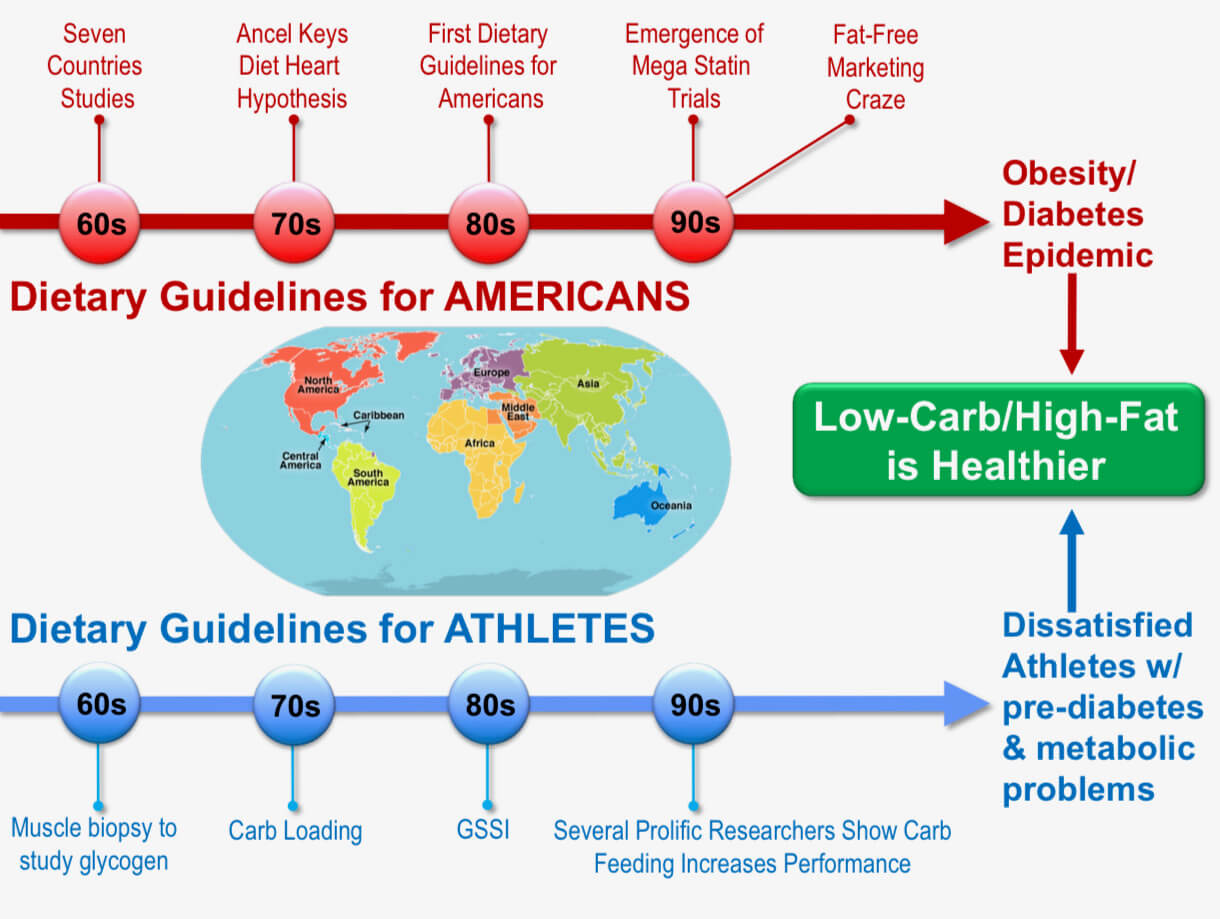 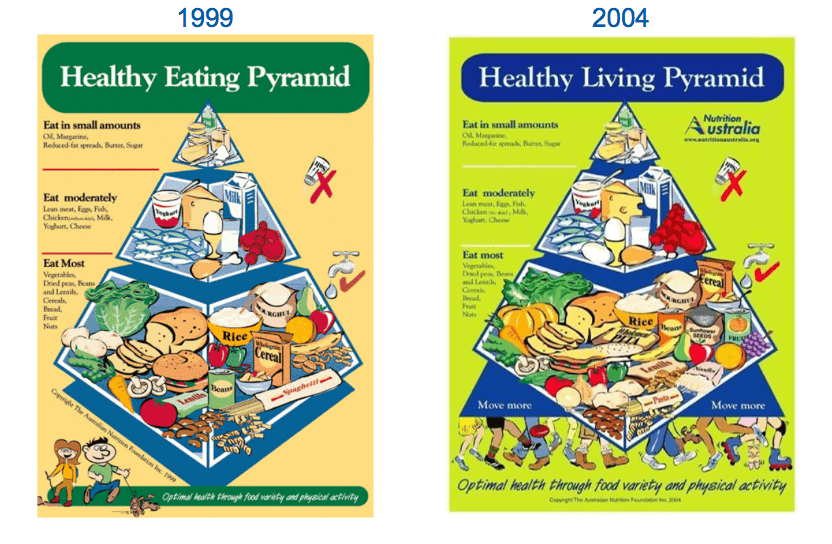 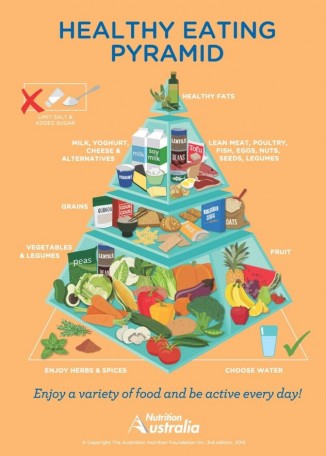 Type 2 diabetes is a major catalyst for disease and predisposes us to health risks such as; heart disease, nerve damage, kidney damage, Alzheimer's and obesity, to name a few. Surely this begs the question, why are we following dietary advice that heightens the likelihood of disease? This idea of waking up with a bowl of cereal and milk and a glass of orange juice on the side - of consuming more carbs and sugar than proteins and fats - is killing us!


If all of this is true, then why is the food pyramid the recommended diet?
The primary reason is that the science they are using has been;

Corruption in the Food Industry


The food industry is rife with corruption. In the 1960's, the sugar industry funded research that branded fat as the primary catalyst for heart disease. Many years later, we now know that sugar is a far greater catalyst for disease than fat. Perhaps the best example of corruption concerning the food pyramid, though, is the Heart Foundation.


Just as the road to hell is pathed with good intentions, the Heart Foundation was probably founded to create a healthier and happier world. But alas, as funding was required to keep the lights on, it was eventually beholden to big business. In the case of the Heart Foundation, that big business was McDonald's, who donated a hefty $300,000 per year in exchange for a trademarked 'tick' next to its fish burgers, salads and chicken wraps, to denote a supposedly 'healthy choice'. The Heart Foundation is considered as a non for profit health promoting charity. We know charities have tax deductible benefits. The concerns lie in where the money is coming from to fund this charity.


What the Research Really Says


Then, there's an issue with the way scientific studies are conducted. The Heart Foundation is another great example here, wherein the 'studies' that support its claims, are based on 'epidemiological research'. Epidemiological research looks at the patterns and trends across population groups to ascertain why diseases occur. Essentially, it is the study of correlations. Data is generally gathered by way of questionnaires, and conclusions are generally drawn based on a series of assumptions made with respect to that data in the form of statistical analysis. And herein lies the problem; epidemiology is reliant upon assumptions rather than facts.


The Heart Foundation is part of the National Vascular Disease Prevention Alliance (NVDPA) which helps doctors determine if a cholesterol is too high to administer a low fat diet and cholesterol lowering drugs. In pathology, if your cholesterol is above the HIGH RISK target range, treatment is recommended. Treatment is usually statin prescription under the medical health insurance scheme. It has to be clinically indicated or calculated risk exceeding 15% absolute risk of cardiovascular events over 5 years. The question lies in that 15% statistic. What was the sample size of the correlational study?


Upon looking at cholesterol, there is no discussion about sugar, gum disease, pregnancy or mercury.  These overlooked variables in the NVDPA cardiovascular 'risk', not causal calculator, can alter cholesterol function.


Another example is the Harvard study that concluded: "red meat consumption [is] tied to early death", based on a questionnaire of more than 81,000 men and women. The simple fact is; a questionnaire cannot take into account the plethora of variables at play when it comes to health.  The sample size is also quite small compared to the complexity of the statement. Questionnaires are not as accurate as the 81, 000 participants declaring previous health complaints, thorough pathology testing and diet evaluation.  If the study reaches the newspaper, radio or television, we seem to believe it without question. Whoever has the money, has the media, which can propose the control or authority. 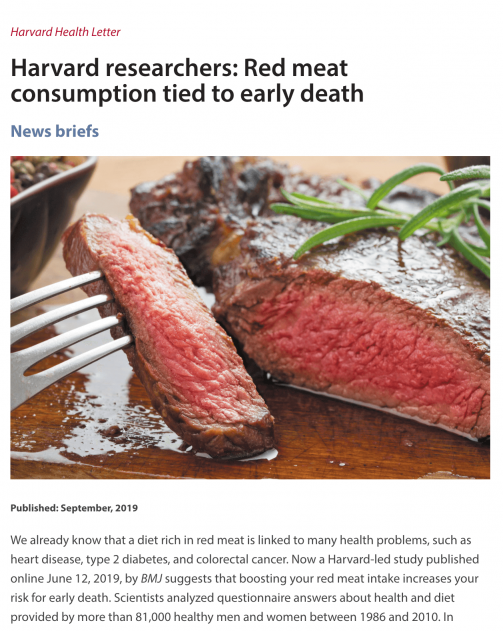 
The Answers Lie in Blood Chemistry


In contrast, the multi-generational studies conducted by Weston A Price paint a very different picture of red meat, as does blood chemistry. Blood chemistry analysis paints a clear picture of diet - it forgoes the assumptions made by popular epidemiological stories and highlights the chemical imbalances that underscore disease and poor health. Blood chemistry tells us that carbohydrates and sugar are not only linked with disease, but that they are often the cause.


Blood chemistry tells us that eating carbohydrate-rich foods like pasta, porridge, bread and cereal in greater quantity than meats - as is suggested by the food pyramid - actually heightens the risk of cancer. Why? Because cancer is fuelled by glucose - the by-product of carbohydrates. Blood chemistry tells us that pasta, porridge, bread and cereal are comparatively low in nutrients. Hence, the notion that we should be consuming them in greater quantities than meats and eggs - all of which are abundant in essential nutrients - is simply absurd. In other words, what blood chemistry tells us, is that the food pyramid is killing you.

How do we sort through all this crud, the secrets are written in the blood
Dr. Hal Huggins - mentor.

We have this fascination with weight loss. But it’s flawed because weight loss doesn’t equal health. You can lose weight by...

Digestive enzymes are a group of proteins that help the body break down carbohydrates, fats & proteins from food...