Nutrition Diagnostics - Is Salt Bad For You? No, Salt is Good For You!

Is Salt Bad For You? No, Salt is Good For You!

There is a common misconception that eating salt is bad for you - that it leads to poor health and is responsible for such things as cardiovascular disease. Historically, though, this is not the case. People from generations ago - ancient times even - consumed a lot of salt. In fact, soldiers in the Roman army were often paid in salt instead of money. Their monthly allowance was referred to as 'solarium', from which came the French word 'salaire' and ultimately, the English derivation, 'salary'. Part of the reason soldiers were paid in salt was that the Romans understood that those on low salt diets could not perform well. This understanding and appreciation of salt is borne out in the famous saying, "are you worth your salt". What's the point of this story? Well, these ancient civilisations had minimal cardiovascular disease relative to today's numbers, despite salt being an integral part of their diet. So, what's changed?


Well, there are forms of salt - particularly sodium - that are bad for you. Sodium as sodium cyanate will kill you quickly. Sodium as sodium benzoate - a preservative in many foods and drinks - is carcinogenic. Many people know they react to monosodium glutamate (MSG). Sodium, as found in water softeners called 'ion exchange chambers', may give you high blood pressure. Unfortunately, it seems that table salt has been tarnished with the same brush.


To make matters worse, people with neurological diseases typically have high blood sodium levels. At face value, it is assumed that this is because they are consuming too much salt - thus, a connection between high salt intake and neurological disease has been formed. The reality, however, is that what we see here is a compensatory increase to correct sodium deficiency and is not a reflection of excessive salt intake. Within a few days of increasing their dietary intake of naturally occurring white salt, these blood sodium levels will drop to a more satisfactory level. Rarely, if ever, over our 30 years in analysing body chemistry, have we seen someone who consumes too much salt.


Next, it is important to understand that not all salts are equal - that there are different types and qualities. This has to do with where the salt comes from, how it is farmed, and what other elements and minerals it is exposed to/contains.

As the name suggests, sea salt is a salt derived from the ocean, or more specifically by the process of evaporation from saltwater lakes. Sea salt is often marketed as being high in minerals and therefore of higher nutritional value than table salt; however, this is not the case. As is the case with seafood being high in mercury, sea salt is contaminated with other elements and chemicals present in the ocean - thus rendering it of low quality and potentially harmful to human health. 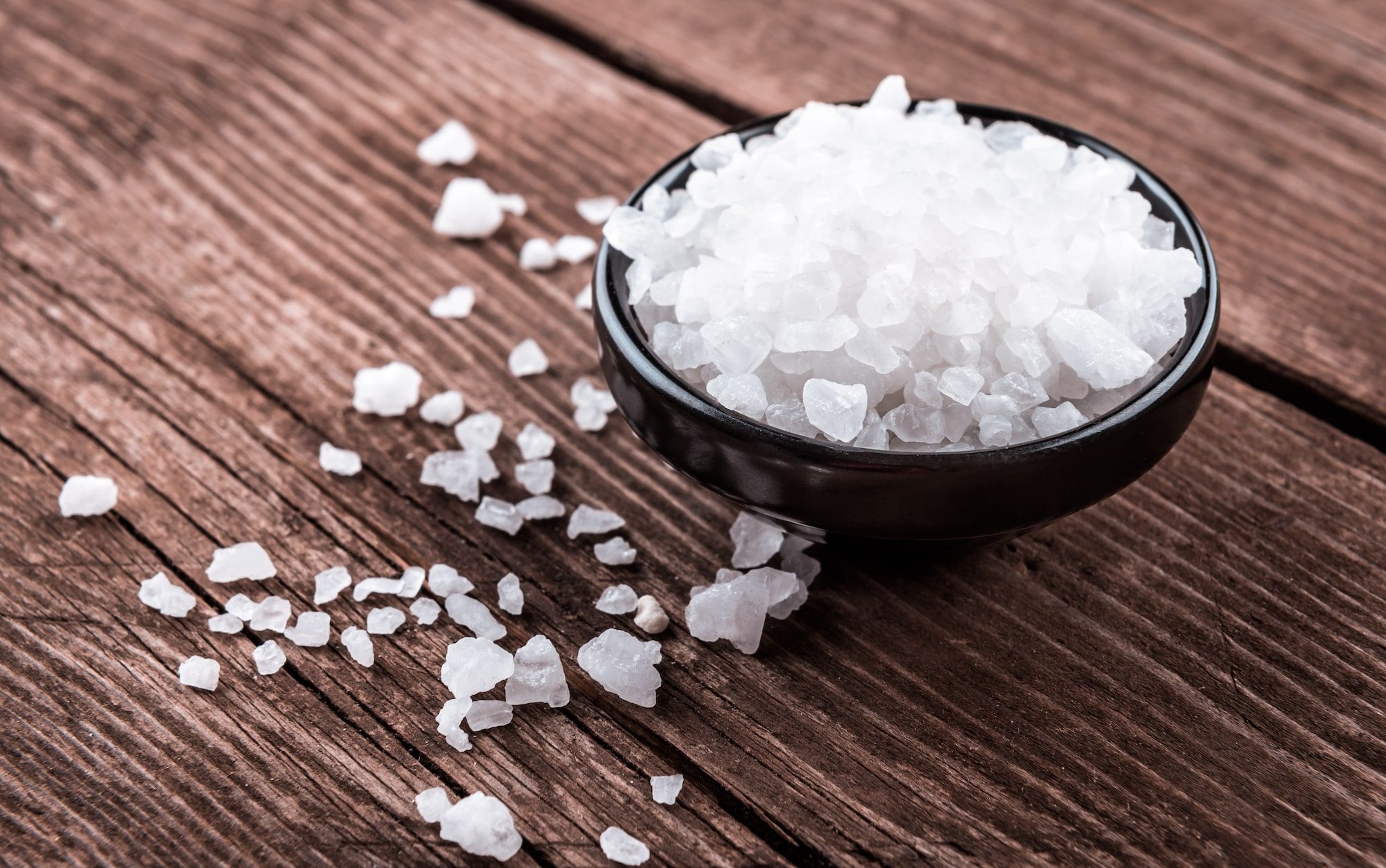 Pink salt - also known as Himalayan Salt - is touted as the healthiest form of salt because it is rich in essential minerals. While this is arguably true, it is also proven that pink salt contains higher amounts of non-biological minerals, including lead, mercury, inorganic iron and cadmium. The notion that the nutrients found in pink salt are of nutritional benefit is also refuted in a recent study conducted by Nutrition Research Australia. They claim, "Despite pink salt containing nutrients, >30 g per day (approximately six teaspoons) would be required to make any meaningful contribution to nutrient intake, a level that would provide excessive sodium and potential harmful effects." 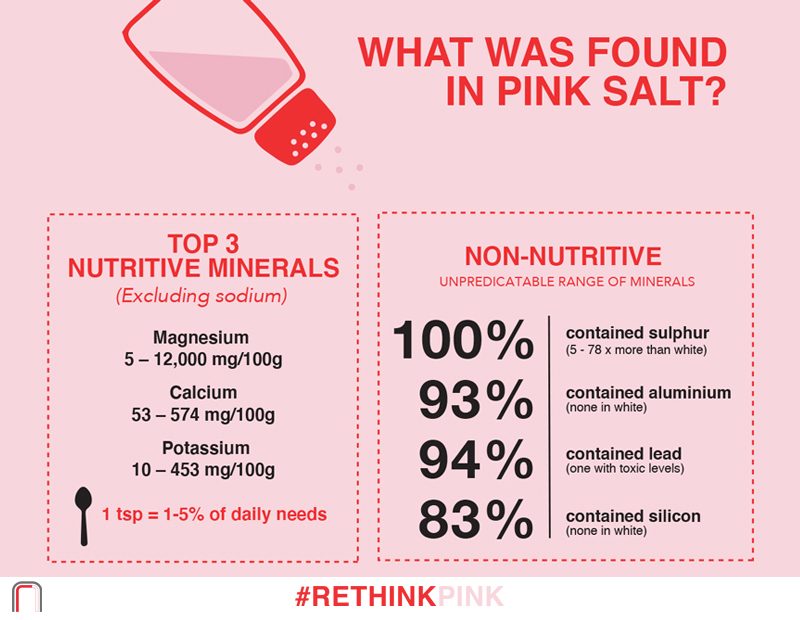 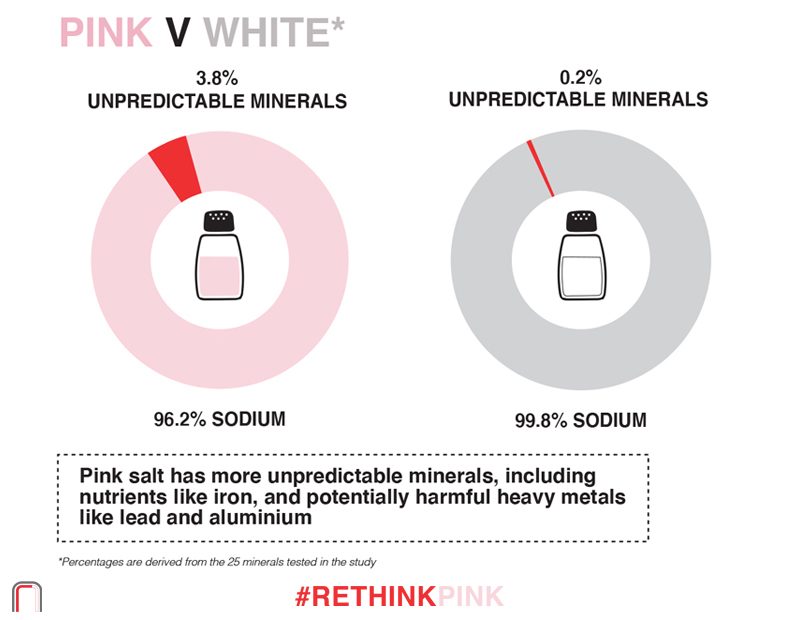 What Salt Should I Eat?

So, if sea salt and pink Himalayan salt are off the table, what salt should you eat? The answer is easy. Salt is sodium chloride (NaCl), and its health benefits can be attributed solely to these two elements. Thus, the best salt to eat is that which is in its purest form of sodium chloride, without anything else. The body cannot manufacture either sodium or chloride itself, so they must be supplied by salt.

The Health Benefits of Sodium

The Health Benefits of Chloride


Made from 100% sodium chloride (NaCl), our canning and pickling salt is free from heavy metals, free-flowing agents, other inorganic minerals and contaminants found in other salt products. It is not processed or refined and is distinguished by the altering process it goes through to remove all impurities.