Nutrition Diagnostics - How Does Mercury Toxicity Affect The Body?

How Does Mercury Toxicity Affect The Body?

Mercury Can Cause Disease


Mercury can enter the body through dental amalgam, pesticides/fertilisers and seafood. After it enters the mouth, it is absorbed by any mucosal tissue (often the gums, or lungs where it is inhaled). Mercury can also enter the body through the eyes - particularly by way of conjunctivitis eye drops which contain the preservative, mercuric acetate. Upon absorption into the mucosal tissue, mercury can enter the bloodstream. Mercury is able to do this due to the high affinity for haemoglobin and sulphur binding proteins (proteins and cholesterol).


Hitching a ride on the 'blood-highway', mercury can go anywhere in the body - often ending up in vital organs, like the kidneys, liver and brain. It can also find its way into bone. When mercury ends up in vital organs, it will often induce a secondary immune response, which is the catalyst for a new chronic disease. Mercury can also work with bacteria, 'bat cave' viruses, parasites, cancer, tumours, fungi, yeasts, moulds, solvents, pesticides and other metals, such as gold, titanium and nickel (stainless steel crowns and dentures) to further weaken the immune system. And herein lies the danger of mercury.


So, how does mercury affect the body and what are some of the conditions associated with mercury poisoning?


What are the Common Diseases and Symptoms Associated with Mercury Poisoning


Mercury toxicity is associated with over 250 symptoms, the most common of which are fatigue, depression and kidney dysfunction. There are, however, much more sinister conditions that arise because of mercury toxicity…

Unlike other heavy metals, mercury can pass through the blood brain barrier.


How Mercury Moves Through The Body To Create New Diseases 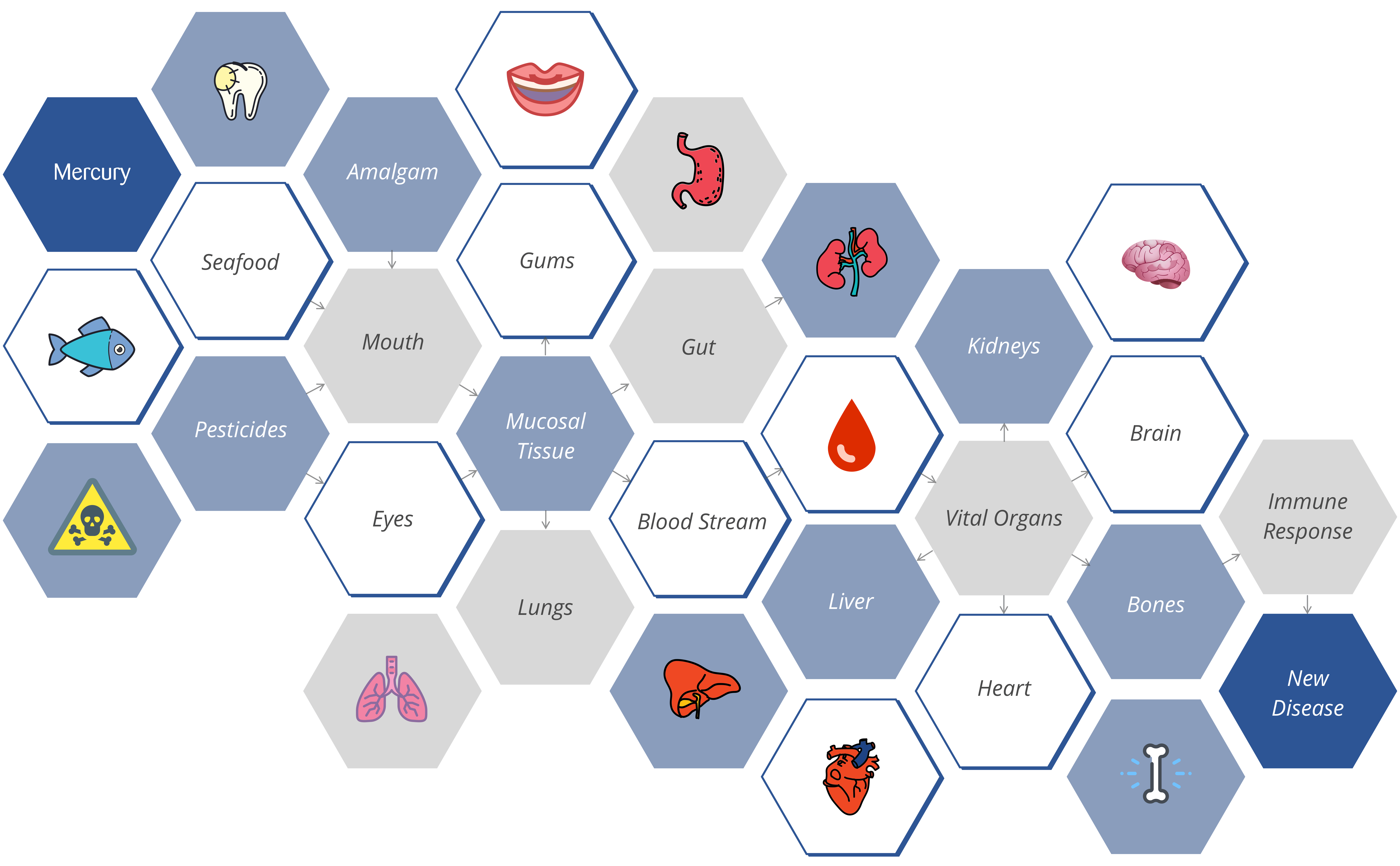 Hashimotos and Graves' Disease
- mercury seeps into the jaw which has an embryological connection with the thyroid, blocking T4 to T3 and then usually resulting in an elevated TSH. In some cases, treating the thyroid may overlook mercury's presence. Always note dental history.
Do not overdose on Iodine (Potassium Iodide or Lugol's). When protein is low and mercury is present, too much iodine can create thyroid disorders by blocking receptor sites.  Breast Cancer and Iodine deficiency have also been linked, but what if mercury is really behind the scene? Always look for Mercury's footprints in women who are of child bearing age, low iron or fast losing protein through menopause.

Who is Most at Risk of Mercury Poisoning and the Diseases Associated with it?


Often those who suffer from iron deficiency (perhaps due to a poorly formulated vegan or vegetarian diet), anaemia, diabetes, hormone imbalances (menopausal women or men who have low testosterone), sarcopenia (poor muscle tone), osteoporosis and osteopenia. These people are stereotypically more at risk of mercury poisoning. This is because their conditions often leave them immunocompromised. When an immunocompromised individual, (especially those who have the above medical conditions) are exposed to mercury, the mercury poisoning will often induce a secondary immune response, which acts as a catalyst for another autoimmune disease or cancer risk.